The Leader-in-Residence (LIR) program is designed to more closely connect our students, staff, and faculty with key community leaders from whom we can learn and benefit.

While C|M|LAW hosts many lawyers and business practitioners as visiting lecturers, panelists, and conference participants each year, the LIRs maintain uniquely deep, long-term relationships with the law school.

Each LIR volunteers their time and talent, and works with the Dean and one or more designated faculty and staff to design a program customized to the mutual needs of the LIR and the law school. Judge Adrine recently retired as Administrative and Presiding Judge of the Cleveland Municipal Court in 2017, a position he held since 2009. He first took a seat on the Cleveland Municipal Court bench in 1981 and was reelected five times. Judge Adrine is the co-author of Ohio Domestic Violence Law and is a nationally recognized expert on domestic violence issues. He is a past recipient of the Cleveland-Marshall Law Alumni Association Alumni of the Year and Cleveland State University Distinguished Alumni Award for Civic Achievement, and in 2017, was inducted as an inaugural member of the C|M|LAW Hall of Fame, along with his father, Russell, a 1954 C|M|LAW graduate. Becker has been a part of C|M|LAW for nearly four decades, first as a law student and then an adjunct instructor, law professor, associate dean, and currently as professor emerita. She served for 24 years as a full-time faculty member at C|M|LAW before retiring in June 2014. Throughout her academic career, Becker maintained a modest pro bono practice, providing legal counsel primarily regarding attorney ethics and professionalism, and forms of discrimination that lesbian, gay, bisexual and transgender (LGBT) individuals commonly experience. Becker currently works in a volunteer capacity as a board member and as general counsel for the ACLU of Ohio. She was awarded the Cleveland State University Distinguished Faculty Teaching Award in 2010 and inducted as a 2018 member of the C|M|LAW Hall of Fame. 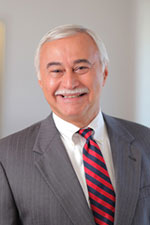 Feliciano is a former Partner in the Litigation Group in the Cleveland office of Baker & Hostetler LLP. Previously, he served as the City of Cleveland’s chief prosecuting attorney and was the first Hispanic public official in the City’s history. Earlier in his career, he was a Cuyahoga County Public Defender, an attorney for the Legal Aid Society, and in 1984, was selected as a White House Fellow. Feliciano has founded or served in leadership capacities for multiple organizations that advance the Hispanic community in Northeast Ohio, including the Hispanic Roundtable, the Hispanic Leadership Development Program, and the Hispanic Community Forum, and the Ohio Hispanic Bar Association. He is a past recipient of Cleveland State University Distinguished Alumni Award, the Cleveland-Marshall Law Alumni Association Alumnus of the Year and is a member of the Cleveland-Marshall College of Law Hall of Fame and the Cleveland State University College of Business Hall of Fame. Jordan is the Chief Executive Officer of the Unify Project, a high-tech nonprofit committed to creating an expanding economy powered by inclusive prosperity. Before joining the Unify Project, she served as Chief of Staff for Cuyahoga County for three years, where she drove early childhood education expansion, workforce systems transformation, the first unified strategic plan, and other key initiatives. She also led the County’s top team and served as chief strategy officer and policy advisor to the County Executive. Jordan also previously served as President and CEO of the Centers for Families and Children. She had previously served as Chief Operating Officer and General Counsel at The Centers. Jordan’s public career also includes serving as Law Director for the City of Cleveland and special counsel to Mayor Michael R. White. Jordan was recognized as one of the Smart 50 leaders in Northeast Ohio by Smart Business in 2017, Nortech’s Innovative Leader of the Year and an EY Entrepreneur of the Year finalist in 2014, Crain’s Woman of Note in 2013, and YWCA Woman of Achievement in 2012. Howard Katz was appointed C|M|LAW's first Legal Educator-in-Residence, providing ongoing advice to Dean Fisher and other faculty and staff on best practices across a variety of areas, including admissions, academic support, bar passage, curriculum, and teaching. Katz is a former visiting professor at C|M|LAW and has served as professor, academic associate dean, administrative associate dean, and special advisor to the dean at several law schools. He regularly makes presentations about teaching and curriculum at national conferences, including participating in the invitation-only annual Wolters Kluwer Leading Edge conference, where he has convened sessions on such topics as design thinking, the future of the casebook, and teaching higher-order skills to law students. He is co-author (with C|M|LAW Professor Kevin O’Neill) of Strategies and Techniques of Law School Teaching and helped develop and serves as editor of the Strategies and Techniques series of books that provide subject matter-specific teaching advice for law professors. Katz is also the former Director of Strategic Planning and Policy for the Cuyahoga County Treasurer’s Office, served as Chief Counsel to the Cleveland City Council, was Senior Fellow at the American Architectural Foundation, and was a Knight Foundation Fellow in Community Building. Percy joined the Standard Oil Company, predecessor to BP America, in 1976 and spent significant time working in London, where he served as group treasurer of The British Petroleum Company plc and chief executive of BP Finance International. Prior to his promotion to chairman and CEO of BP America in 1996, he served as president of BP Oil’s U.S. Division and executive vice president of BP America. He is a member and past chair of Cleveland-Marshall’s National Advisory Council and is past chair of the CSU Foundation Board of Directors. During the 2012-13 academic year he served as interim dean of the Monte Ahuja College of Business at CSU. Since retiring from BP, Mr. Percy has held positions as the head of Phillips Petroleum’s Refining, Marketing and Transportation Company, and conducted workshops on corporate governance for the AHC Group, a strategic consultant in the areas of environment, energy and materials. Percy served as a member of President Clinton's Council on Sustainable Development as Co-Chair of the Climate Change Task Force, and is active with several organizations pertaining to environmental and economic research. In 2014 he established named professorship at C|M|LAW to support scholarly work in environmental or energy law. Carter E. Strang is a Tucker Ellis LLP Founding Partner and environmental law, product liability and mass tort litigator. He has lost only one trial in his 35 year career. A frequent lecturer and author, Strang has been published over 50 times on a wide variety of legal topics. He is a Master Bencher in the Judge John M. Manos Inn of Court. Strang is the only person to serve as President the Cleveland Metropolitan Bar Association (CMBA) and the Federal Bar Association Northern District of Ohio Chapter. He is the Cleveland Metropolitan Bar Foundation President Elect and will become Foundation President in 2020. Strang created two award-winning pipeline diversity and inclusion initiatives: the CMBA Louis Stokes Scholars and Tucker Ellis Pipeline Programs. A high school teacher while attending law school at night, he used his teaching expertise in drafting the curriculum of the nationally acclaimed CMBA 3Rs program. A Cleveland-Marshall Leader-in-Residence and member of its Visiting Committee, Strang created the Professor Joel J. Finer Award in honor of his former Cleveland-Marshall professor. He is a long time Cleveland-Marshall Alumni Association Trustee and a recipient of its Alumnus of the Year Award. Other honors include the CMBA Justice for All and Green Sustainability Awards, the Kent State University and Honors College Distinguished Alumni Awards, and the Federal Bar Association Elaine “Boots” Fisher Awards. A two-sport college athlete, Strang is a Cleveland Triathlon Gold Medalist who twice bicycled from Cincinnati to Cleveland to raise money to fight cancer. Kelly Tompkins is an attorney and business leader who established the P. Kelly Tompkins Leadership and Law Program at C|M|LAW to provide leadership skills education to a new generation of lawyers. He currently serves as Chair of the law school’s Board of Visitors. Tompkins is also a Senior Advisor at the Cleveland public relations firm Dix & Eaton. He is a past recipient of the Cleveland State University George B. Davis Service Award and Cleveland-Marshall Law Alumni Association Alumnus of the Year and delivered the commencement address for the 2005 graduating class of Cleveland-Marshall. He was an inaugural inductee into the C|M|LAW Hall of Fame in 2017. His impressive legal and corporate career has included numerous public company roles, most recently as Executive Vice President & Chief Operating Officer at Cleveland Cliffs where he previously served as its Chief Financial Officer and Chief Legal Officer. Prior to joining Cliffs, Kelly spent 15 years with RPM International, including service as Executive Vice President & Chief Financial Officer and Chief Legal Officer. Tompkins also served as President of the Cleveland Bar Association from 2005-2006. Wilson serves as General Counsel of Cleveland State University, providing counsel to the University’s board of trustees and president on a wide variety of matters. She joined the University in 1996 as a Lecturer at C|M|LAW and in 1997 became the Unviersity’s Assistant Legal Counsel. She served as Secretary to the Board of Trustees from 2000 to 2011, and she was named General Counsel in 2004. In 2013, she was elected to serve as the first Vice President for Diversity and Inclusion of the Cleveland Metropolitan Bar Association and currently serves on its Diversity and Thought Leadership Committees. Wilson received the 2013 Trailblazer Award from the Norman S. Minor Bar Association, was named 2014 Professional Woman of the Year by the Women of Color Foundation and was a finalist in Crain’s Cleveland Business 2014 Class of Top Ten General Counsel and In-House Counsel in the Region. In 2015, she was named a YWCA Woman of Achievement.

The C|M|LAW Leader-in Residence (LIR) program was launched in February 2017. Our first Leader-in-Residence was Steve Percy, a prominent C|M|LAW alumnus who volunteered his time and expertise in his latest of many acts of generosity to C|M|LAW. The program also includes those with a particular specialty such as Technologist-in-Residence and Legal Educator-in- Residence.

Such in-residence programs are very common at graduate business schools, but far less common among law schools. CSU's Ahuja College of Business has eight Executives-in-Residence as of February 2018.

Community leaders willing to devote time to the program on a regular basis throughout the term of their service. While most LIRs will be retired or semi-retired, the key commitment is a willingness and availability to be at the law school on a regular basis. While most LIRs will be lawyers and C|M|LAW alumni, it is not necessary that the LIR be an alumnus or a lawyer.

Possible activities include, but are not limited to: