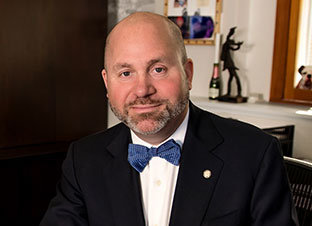 It was past 10 p.m. on a weeknight in the summer of 2016 when Friedman & Nemecek, LLC Partner Ian Friedman ’97 arrived at the Trumbull County Juvenile Detention Center for a meeting with Bresha Meadows that would change his life.

On his way home from work earlier in the day, Friedman had received a call from a contact at the Domestic Violence & Child Advocacy Center with the harrowing story of Bresha Meadows, a 14-year old girl in custody for killing her father, Jonathan Meadows.  Friedman met with Bresha’s family later that evening but was hesitant to take on a new case because of his heavy trial schedule at the time.  He promised the family he would meet with Bresha before deciding on taking her case.

“Meeting Bresha, it was very clear that she did not have the means to mount the scope of defense that was going to be necessary in this case and I was concerned she would just get pushed through the system,” Friedman recalled.  “There was no way I could just walk away from her and let that happen.  There was a sense that came over me that night that (Bresha’s case) was the reason that I do what I do [criminal defense].”

From the parking lot of the Detention Center, Friedman, a 2019 inductee in the C|M|LAW Hall of Fame, called his partner, Eric C. Nemecek ’07, to tell him he was taking the case.  Nemecek told Friedman he knew before he went to the visit that he would take the case – because that is the kind of person and attorney Friedman is.

Bresha Meadows’ case was unique, and would ultimately gain national attention, because the main fact was not in dispute–Bresha had indeed shot and killed her father.  But prior to that she had faced years of abuse and sexual assault at the hands of her father.  She had witnessed her mother, Brandi Meadows, suffer domestic abuse for even longer.  Earlier in the year, no longer able to withstand the abuse, Bresha had attempted suicide. In Bresha’s mind, her father’s death was a clear act of self-defense.

The killing of a parent is rare and majority of kids are victims of severe child abuse.  Yet most of these children are tried as adults and go to prison for decades.  In a small town in Warren, Ohio, Bresha could easily have gone unnoticed and seen the same fate as many children before. Friedman and Bresha’s family were determined not to let that happen.

With the help of social media, soon there were thousands of others determined not to let that happen either.  Local media coverage sparked social media outrage and national and international media coverage.  The hashtag #FreeBresha was born and Bresha now stood for something greater than this case – she was the poster child for survivors of domestic abuse, improvement in treatment of minority children in the justice system, better mental health treatment for juveniles, and so much more.   Events and rallies were held throughout the country on her behalf.

Friedman recalled what would have ordinarily been routine pre-trial hearings were filled with buses of supporters from across the country.  A GoFundMe page was flooded with donations that allowed her to engage the best experts, have the best mental health providers and mount the best possible defense.

“The result ultimately reflected well on the (juvenile justice) system, but it was not an easy road getting there,” Friedman said.  “It’s extremely easy for a case with these facts to have a less equitable outcome.  It was only after digging really deep into the root cause of the shooting that you really start to understand the significance of the case and the lessons to be taken from it.”

As for the lessons Friedman draws from this case, he cites three key takeaways:

Friedman believes there is still a lot of work to be done in the juvenile justice system.  Still he is hopeful that this case and the #FreeBresha movement will stand for more that an isolated case and points to a juvenile case of his some time following Bresha’s plea deal where the judge used case law from the Meadows’ case in his ruling.

“There’s some really caring people in the juvenile justice system, but the system has flaws,” Friedman said, pointing to inadequate funding and inconsistency with laws and case results.  “Oftentimes, these cases are processed through the system missing the critical component–the why.  The answer to that question cannot come from just a superficial assessment.”

In February 2018, Bresha returned home to her family.  Earlier this year she graduated high school with a 4.0 GPA for the year.  She has began going around the country talking to fellow victims and survivors.  Friedman remains close with Bresha and her family, and still offers her advice and support.

“She could very easily take this case and move on, never wanting to address it while running from the past. That is not what she has done, instead using her platform to empower herself for the benefit of others.  You couldn’t have a greater or more inspiring authority for survivors than Bresha.”  Friedman said.

Looking forward, Bresha plans to attend college and study criminal justice.  She is considering careers as a lawyer, detective or domestic violence advocate, hoping to be able to help families such as her own.

With the national attention Bresha’s case received, she is likely to not be the only youth who is inspired to consider a career in law with the hopes of justice for others.  Friedman would be excited anyone who saw this case and was inspired to become an attorney join him in the profession, believing they would have the right sense of compassion and understanding what is just.

As for Friedman, he will continue fighting for his clients and ensuring the next generation of lawyers will do the same – as an adjunct professor at Cleveland-Marshall College of Law and President of the Cleveland Metropolitan Bar Association, where he chairs the New Lawyer Bootcamp.

“I am blessed to be able to look back at my career and say part of it was spent fighting for (Bresha’s) cause,” Friedman said.  “I am very fortunate to have been involved in this case because the experience was exactly why I went to Cleveland-Marshall and exactly why I wanted to be lawyer since I was a little kid.”