A truly cross-sector event, Cleveland-Marshall’s Cybersecurity and Privacy Protection Conference is one of the leading educational and networking events in the Great Lakes Region, and features rich content of interest to legal and compliance professionals, information technology and security experts, and executives responsible for developing security and privacy policies. 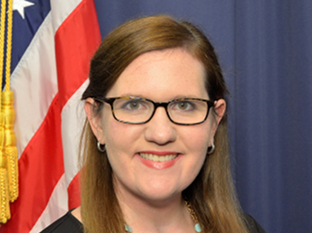 Rebecca Kelly Slaughter was sworn in as a Federal Trade Commissioner on May 2, 2018.

Prior to joining the Commission, she served as Chief Counsel to Senator Charles Schumer of New York, the Democratic Leader. is the Assistant Director of Futures Identity in the Office of Biometric Identity Management (OBIM) within the National Protection and Programs Directorate (NPPD) of the Department of Homeland Security (DHS). OBIM, formerly the United States Visitor and Immigrant Status Indicator Technology (US-VISIT) Program, is the lead entity in DHS for biometric identity management services across Government. Boyd’s responsibilities include overseeing science and technology activities related to biometrics and identity services as well as special projects involving interagency and international partners, industry, and academia.

As a Captain in the U.S. Navy, Mr. Boyd served on active duty as the Director, Naval Identity Management, on the Secretary of the Navy staff. He interacted and coordinated with numerous Government departments in advancing technologies, policies, and human factors to improve applications of digital identities. Captain Boyd drove development of a handheld biometric device supporting Navy, Marine Corps, and Naval Criminal Investigative Service operational needs.

Previously, he commanded the Reserve Component unit of the Navy Headquarters Manpower, Personnel, Training, and Education organization. As a civilian, he worked as a program manager for Battelle Memorial Institute, supporting Joint Staff J-8, then Navy Headquarters Staff, in the field of chemical, biological, radiological, and nuclear defense, as well as anti-terrorism/force protection. Additionally, Boyd managed highly hazardous chemical plants for a variety of companies across the United States.

Boyd holds a bachelor’s degree in physics from Virginia Military Institute. He earned master’s degrees from the Naval Postgraduate School in operations analysis and the Naval War College in national security and strategic studies. He served on active duty in the U.S. Navy Submarine Force from 1982 to 1994 and in the Navy Reserves until 2012. Travis LeBlanc, vice-chair of Cooley's cyber/data/privacy practice, is a leading authority on cybersecurity, data privacy, telecommunications and the regulation of emerging and disruptive technologies. Drawing on his broad experience in federal and state government, he helps clients manage litigation and regulatory risk, as well as strategically respond to data breaches, cyberattacks, nation-state attacks, dissemination of stolen data, misinformation campaigns and government enforcement efforts, including those by state attorneys general. In addition to overseeing crisis management, internal investigations and national security matters, LeBlanc advises and counsels clients on complex commercial, antitrust and intellectual property litigation. The respect and skills he has earned during his career have translated into appointments and recommendations across political spectrums, including his selection by the US Department of Commerce and the European Commission as an arbitrator for the EU-US Privacy Shield Framework in 2017 and his presidential nomination to the Privacy and Civil Liberties Oversight Board in 2018. Steven Mitchell is a native of Kansas City, Missouri.  He graduated from the University of Missouri with an undergraduate degree in 1981, and a law degree in 1984.  He maintained a private practice of law with a significant health law component, until 1997, when he joined the Missouri Department of Social Services as a managing attorney in charge of regulating nursing homes and Medicaid reimbursement rates.  He later worked as a consumer fraud attorney in the Missouri Attorney General’s office, and as the managing attorney in the Kansas City office of Missouri Protection and Advocacy Services, before joining the US Department of Health and Human Services, Office for Civil Rights in Region VII as an Equal Opportunity Specialist in 2003.  Mitchell became a Supervisory Equal Opportunity Specialist in 2008, supervising a team of investigators charged with enforcement of non-discrimination laws and HIPAA.  In June, 2013, Mitchell was named Deputy Regional Manager for Region VII. In June, 2015, Mitchell became the Deputy Regional Manager for the newly created Midwest Region for OCR, and remains in that position.